Music industry mates John Farnham, Jimmy Barnes, Noiseworks & Diesel will band together for one night only with the Playing It Forward benefit concert at Melbourne’s Hisense Arena on June 28.

Overwhelmed by the massive support he has already received from industry alumnae, Support Act set-up a Help A Mate fundraising page for the renowned guitarist, giving his family peace of mind so they could focus on what he needed medically.

Supported by long-time friend Olivia Newton-John, who Chet has performed regularly with in the past, he underwent surgery and treatment at the ONJ Wellness Centre. His friends are now banding together for a special fundraising concert – Playing It Forward – to raise continued proceeds for Chet’s Help A Mate appeal, as well as donating much-needed funds to Olivia Newtown John’s Wellness Centre, and Support Act.

This one-off show is sure to be a night to remember! 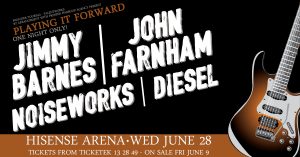